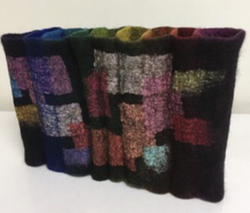 ​A BFA graduate of Carnegie Institute of Technology in Graphic Design, Rae Gold has been self-employed for 30 years. Making wearable art, she exhibited in such shows as American Craft Baltimore, Philadelphia Museum Craft Show, and the Smithsonian Craft show.
She was the Co-Director of Fiberart International 2About 019.
Gold’s work has been published in books, including Worldwide Colors of Felt, by Ellen Bakker, The Surface Designer’s Handbook, by Holly Brackmann, and Dimensional Cloth by Andra Stanton.
For the last 13 years Gold has devoted her creative life to working with three dimensional felt forms, taking classes from the finest dimensional instructors from around the world. She is now sharing her experience and knowledge with new students through Contemporary Craft virtual classes.. 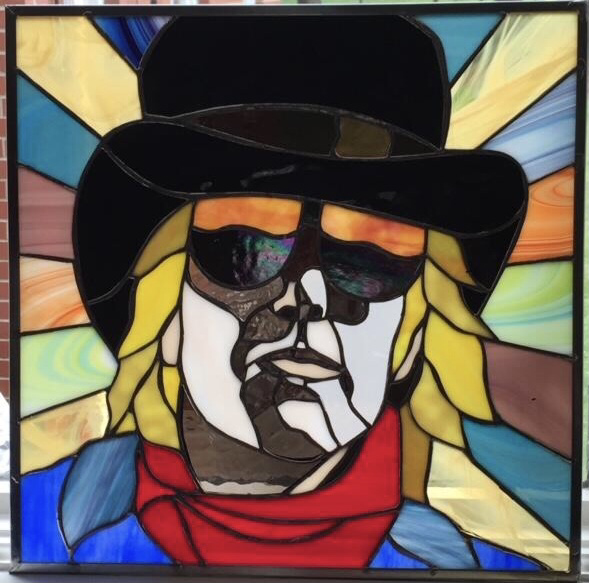 Keeley began her stained glass career in 2006 as an apprentice at Williams Stained Glass Studio in the Castle Shannon area of Pittsburgh. In 2015, she took over the head design & managing duties, and also makes or repairs panels and lampshades for the studio.

On her own time, she is working on a colorful series of rock icons/bands, with the hopes of having an exhibition in the near future.

Keeley graduated from the Ohio State University in 2002, with a Bachelor’s degree in Art Education. She was also a member of the OSU women’s track team, competing in the Javelin event for 4 years. Her favorite experience in college was a 3 month study abroad program in Florence, Italy, studying Art History, Drawing & Painting. 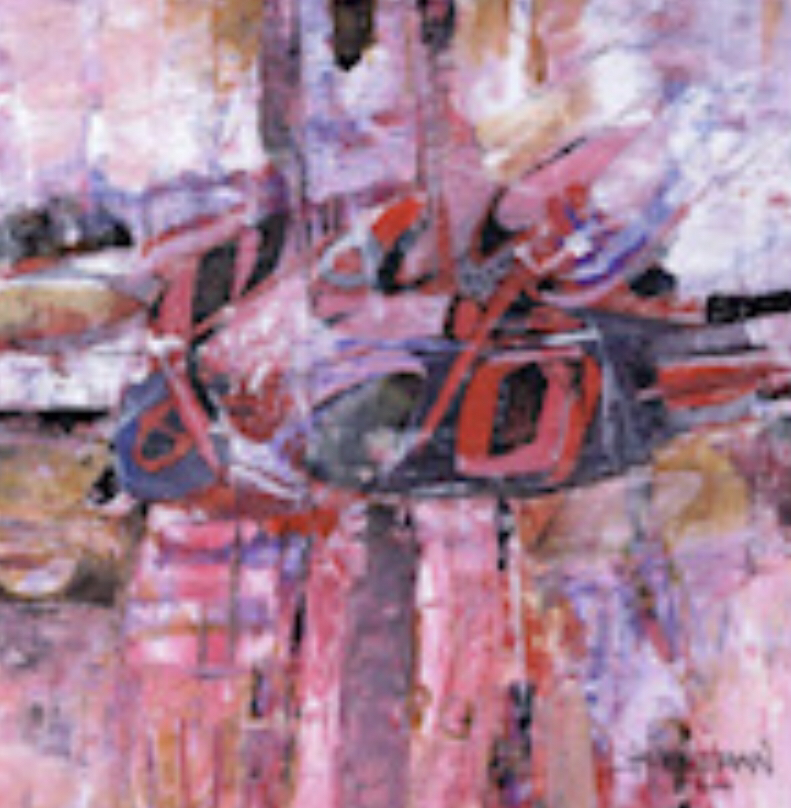 Victor is an accomplished artist and art teacher who has been sketching and painting locales from around the world for over 40 years. His collections of Western Penn- sylvania include Fallingwater, the Phipps Conservatory, Cooks Forest, and Carnegie Museum. Victor Beltran has won numerous awards and has exhibited in the US including at the Carnegie Museum of Art in Pitts- burgh, Mexico, Peru, Ecuador in the Peruvian Embassy Gallery, and Brazil. Victor Beltran has over 50 years of experience in architecture, illustra- tion and watercolor. As an= accom- plished watercolorist and teacher, he has taught at Phipps Conservatory, conducted workshops for artists’ guilds, and previously served as Vice- President of the Pittsburgh Water- color society.


After many years of sketching throughout the world, Victor has developed extraordinary fine-tuned skills where he can quickly sketch spontaneously to produce stunning images regardless of place or setting.


Beltran produces artistic works that build on his talents and training which is expressed in his spontane- ous art forms. In the spring of 2009, Victor produced an event, Art Just in Time, where he produced 16 acrylic paintings in a day. Recently, during a live performance by the Bach Choir of Pittsburgh, Victor created 4 paint- ings while perched on high a scaffold during Musssorgsky’s Pictures at
an Exhibition. During his travels to Europe, Canada, Ecuador, Mexico and Eastern United States, Victor Beltran has completed over 60 sketch books which depict thousands of locals in- cluding the Swiss Alps, Venice, Paris, Amsterdam, Munich, Rome, Sienna, Florence, Seville, Cordoba, Granada and San Miguel de Allende, Taxco, Morelia and Quito.


Victor Beltran is a member of the Pittsburgh Watercolor Society and Associated Artists of Pittsburgh. Beltran, a native of Lima, Peru, came to Pittsburgh in 1986 and currently resides in the Fox Chapel Area.
https://m.facebook.com/VictorBel- tranArt/ 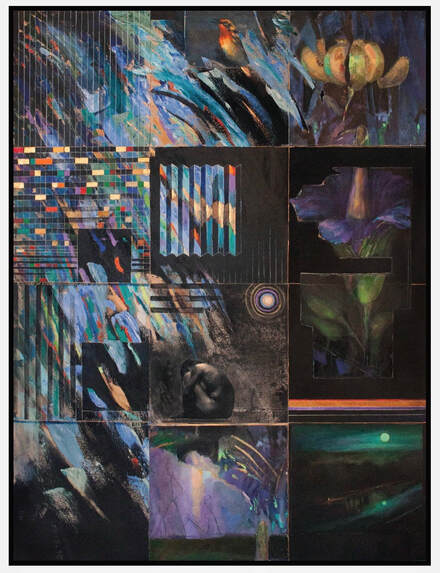 ​"I have known since I was a small child that I was an artist. I have not been content to paint pretty pictures but have always had a need to speak to humanity about those issues that affect our lives…our souls… our very existence."For almost a decade after September 1, 2001, I sought to artistically break down barriers between diverse groups of people. This was something that I have been involved in socially for a lifetime. A celebration of the diversity of humanity is key to unlocking the door to peace in a world plagued by prejudice, hatred, and war.
The work evolved to speak of the fragile interrelationships between humanity and our ‘Endangered’ world (2010-present). The paintings often depict the human form monochromatically with the endangered flora and fauna in full color to establish greater equality between humanity and the over 41,000 endangered species on Mother Earth. These species are as important to nature’s fine balance as humankind, if not more so. Since clothing connotes an era or culture, the figures are generally undraped to show the universality of the problems we are facing and the need for a global partnership. This is necessary for the world to be a healthy place for future generations.
My paintings are created to work on a myriad of levels and to speak in a universal language. I try not to sensationalize or be confrontational because I want my viewers to internalize, reflect, and see the face of a world that we have painted. Within the work there is urgency but also an element of hope. 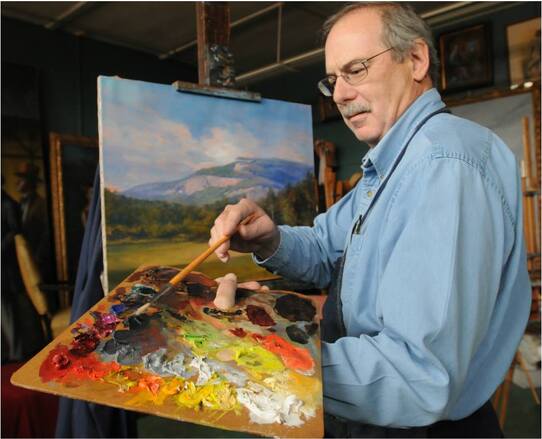 
James Sulkowski received his education from the Pennsylvania Academy of Fine Art, Carnegie Mellon University, and - most notably - the Art Students League of New York with Frank Mason and Robert Beverly Hale. His timeless works have been displayed in the White House, the Metropolitan Opera House in New York City, and historical museums abroad. Since first offering classes in 1981, he has instructed hundreds of students - first at his studio, then at the university level and workshops across the country.
James has authored articles for numerous publications, including American Artist, American Art Review, and US Art. His first full-length book, Mastering Oil Painting, was published by Walter Foster in 2013. For eleven seasons, he hosted the instructional show Let's Paint on public access television. His art instruction dvds art and art video downloads have been collected worldwide .

His original oil portraits , commissioned murals and other work has been collected worldwide and is in public and private collections including President and Mrs. George H.W. Bush, The Metropolitan Opera of New York, The Abdul Azziz Museum in Jedda, Saudi Arabia, The Hotel Lafayette in Nemacolin Woodlands Resort, Carnegie-Mellon University and countless others.

For those interested in original oil paintings , commissioned portraits , florals , landscapes , still life or a special project please email us or call us . Art workshops conducted nationally and in the Pittsburgh area as well as art video downloads , art instruction dvds and art instruction books are all available . James' classical art approach has garnered many awards throughout the years and he shares his knowledge with those who attend his art workshops in Houston,Pa.

James lives in Pittsburgh with his wife, Sherri, and their adopted beagles, Opal and Molly. 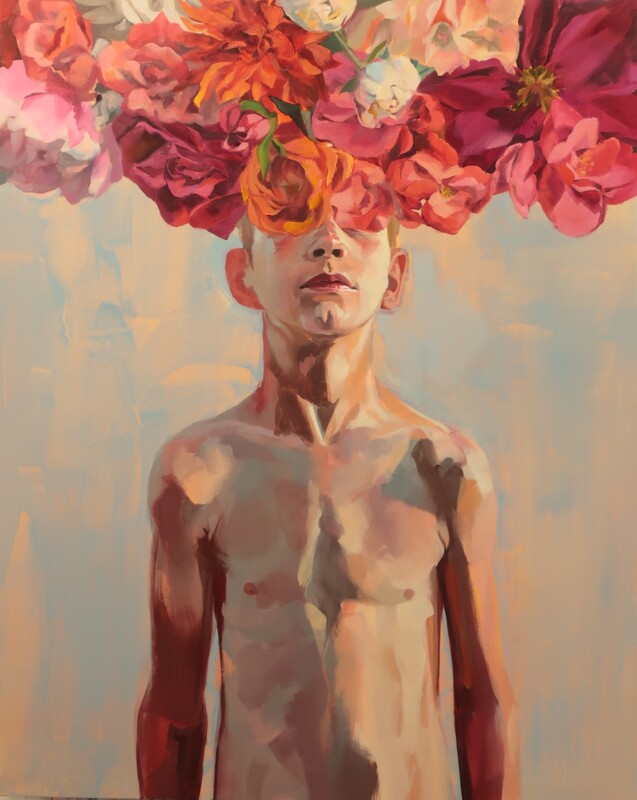 Annie Heisey is an artist and educator living and working in her native city of Pittsburgh, PA. Best known for her paintings of beautifully rendered figures in abstracted or impossible environments, Heisey’s work aims to disrupt the viewer’s experience of a painting as a simulation of the physical world. Since receiving her MFA from Boston University in 2007. Heisey’s work has been exhibited nationally in galleries and institutions which include the Boston Center for the Arts, Site:Brooklyn Gallery in Brooklyn, NY, and the Carnegie Museum of Art in Pittsburgh, PA. Her awards include the Junior Artist Residency at the Oregon College of Art and Craft in Portland, OR, a nomination for the Portland Art Museum’s NW Contemporary Art Award, and the 2019 Festival Award at the Three Rivers Arts Festival. Her work has been included in several catalogs and publications including the Boston Globe. She is represented locally by BoxHeart Gallery 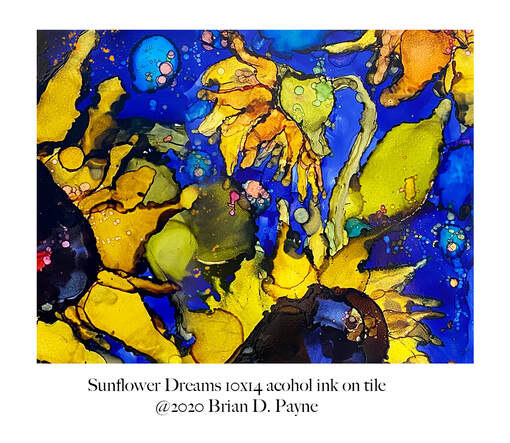 Brian Payne (Brian D. Payne Studio) is a visual artist living and working in his hometown of Girard, Pennsylvania. Formally trained at the Art Institute of Pittsburgh, he continued his education at Triangle Technical Institute, and further honed his craft with over 30 years of experience and practice. After mastering watercolor painting, and being accepted into many juried exhibitions for his watercolor work, Brian allowed himself to experiment with a variety of media and painting styles. His exhibition, Clarity, at Stonewall Gallery contained over 75 new paintings, created over the span of a single year. This exhibition was a catalyst for an increase in creative expression—Brian was inspired to create without limitations. This new attitude has allowed for freedom within Brian’s craft, and has solidified his place as an established artist within his community. 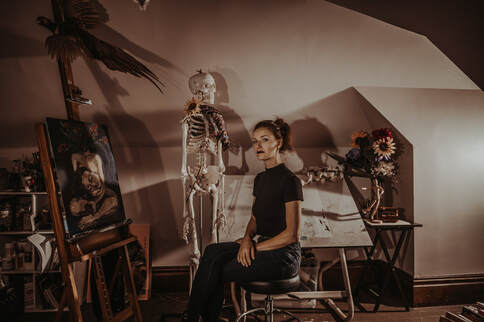 Please mark your calendars for Thursday, October 15, 7pm and plan to join us for a fun and informative evening as we welcome our guest speaker Olga Brindar who has agreed to lead us through an online drawing lesson. Olga will be using charcoal but please feel free to select your own choice of supplies. All are welcome to draw along or just just watch the presentation.

Olga Brindar is a Russian-American artist who draws, paints, illustrates, and creates murals. In 2009, she graduated with a BFA from Carnegie Mellon University. She has been showing her work as well as teaching in the Pittsburgh area for over a decade. She lives in the Northside with her partner, two-year-old daughter, and two red dobermans.

December 19, 2019 - There is no December meeting due to the holiday season. ​
January 16, 2020 - Pot Luck
This is our annual member's social. Bring your favorite appetizer or dessert to share while we get a chance to catch up with one another. Please bring a piece of your artwork for our artist show and tell so members, new and old, will get a chance to see the wide variety of art styles created by our membership.
Powered by